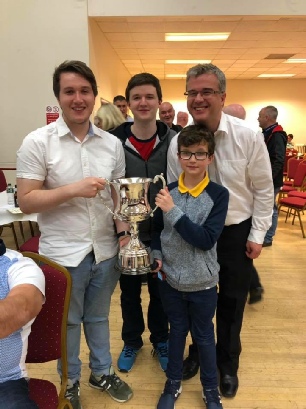 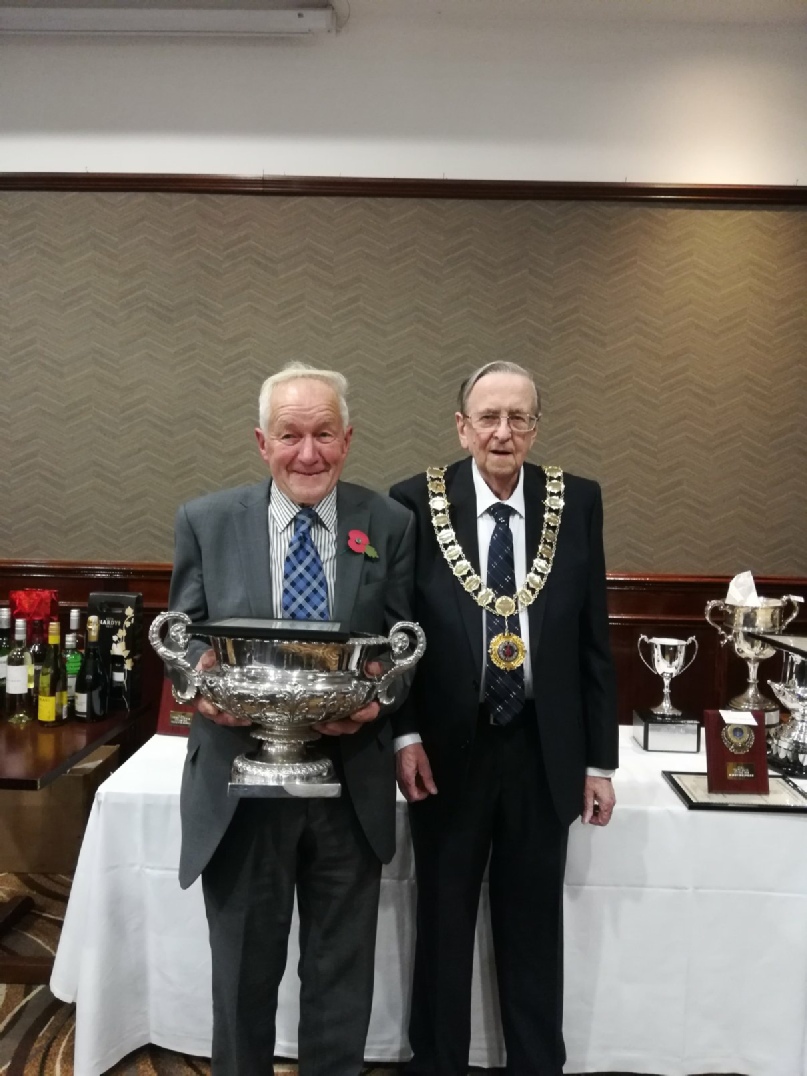 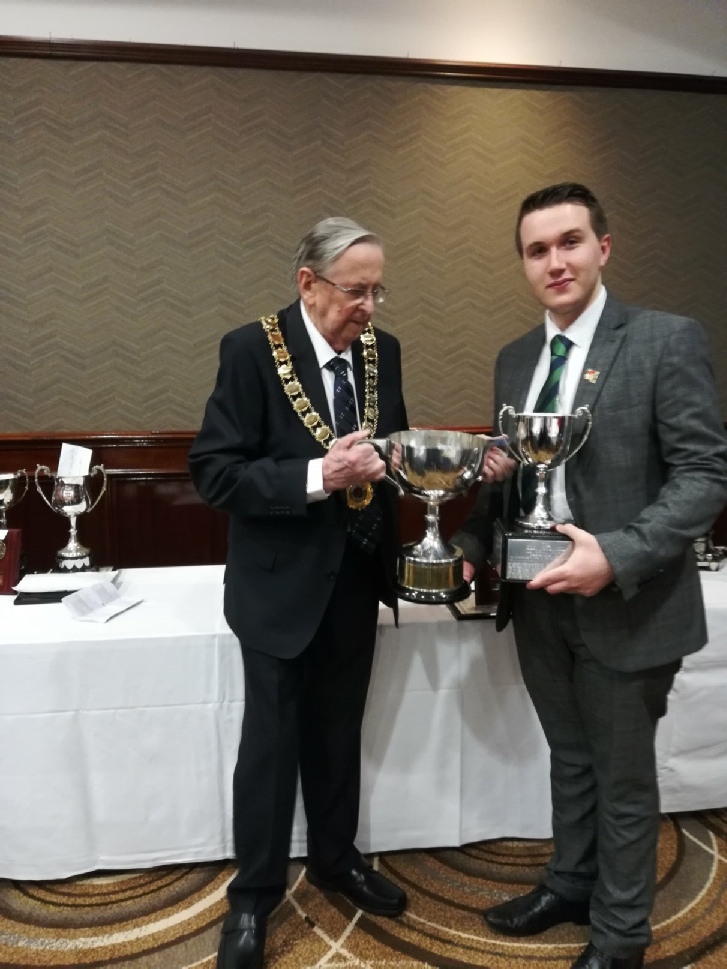 Here’s an oldie! Let’s hear from you: names, where, when? 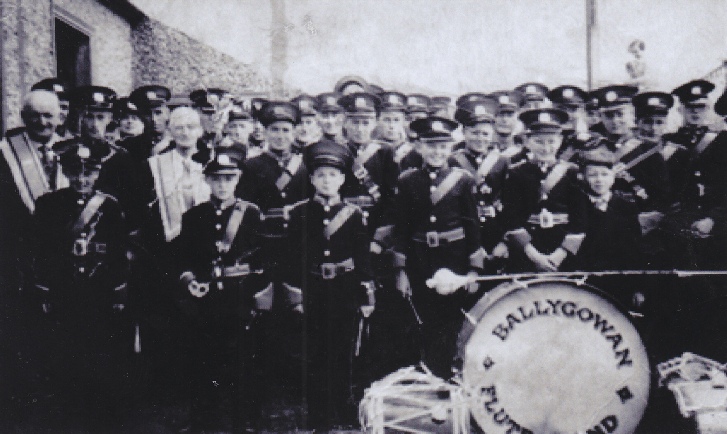 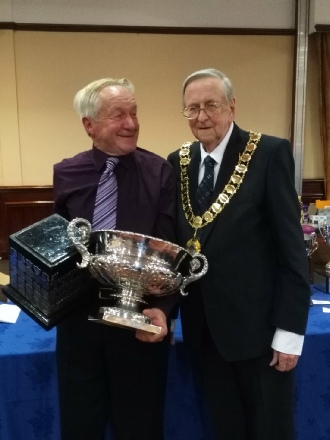 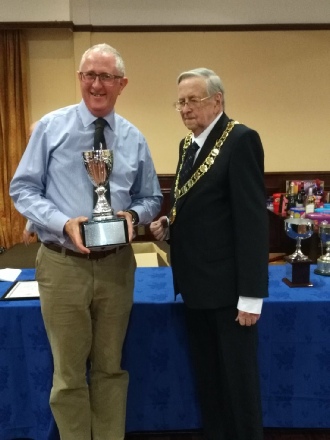 12th of July 2017 in Ballynahinch - what a great day it was. Photo: courtesy of Newtownards Chronicle. 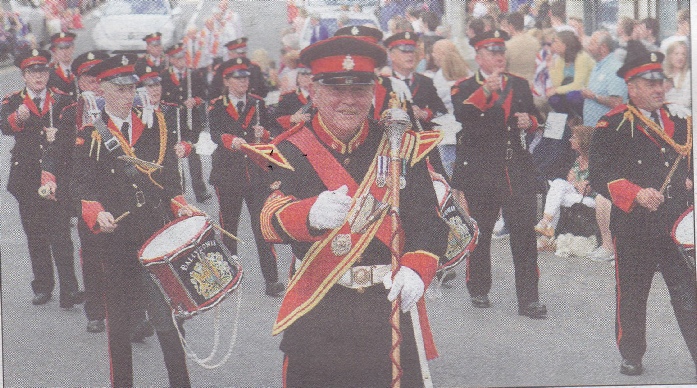 1947 Belfast Parks schedule - It’s doubtful if any current players were there! 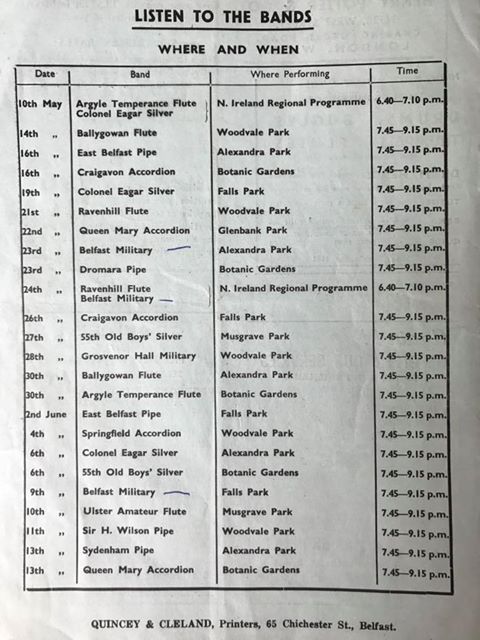 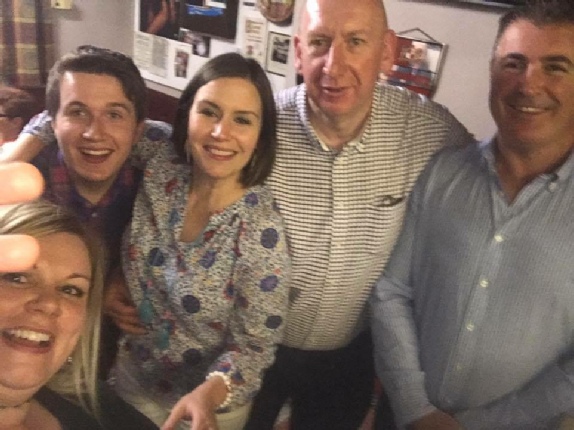 Eric McMillan, formerly of Ravenhill and originally of CLB has joined our ranks. His first public appearance with us was the Scottish Amateur Band Association’s Spring Contest in Troon, May 2017. Welcome Eric - we trust you will have a long and happy time with us. 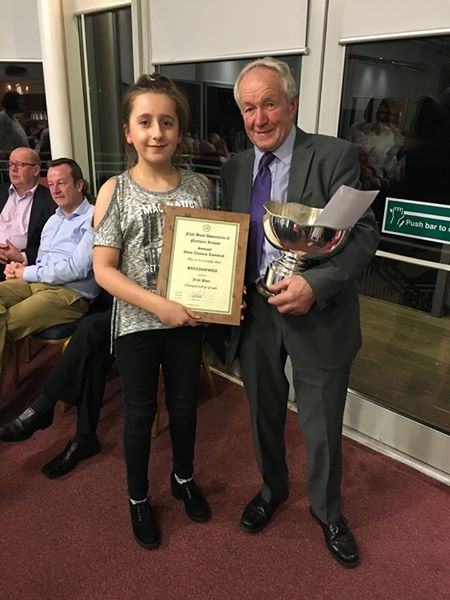 Here’s a blast from the past.The late Billy Davidson buttoning up his tunic! 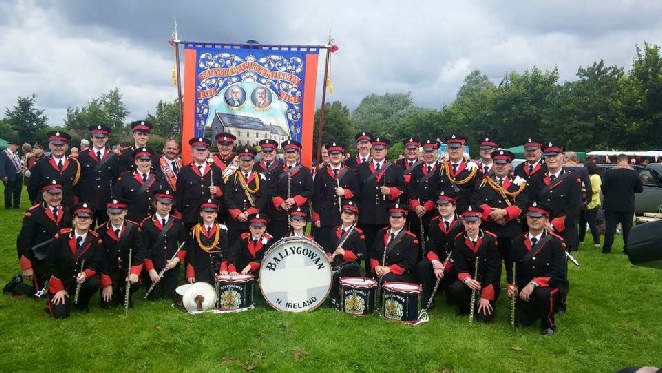 Chairman Stephen is now skilled to play flute or percussion! 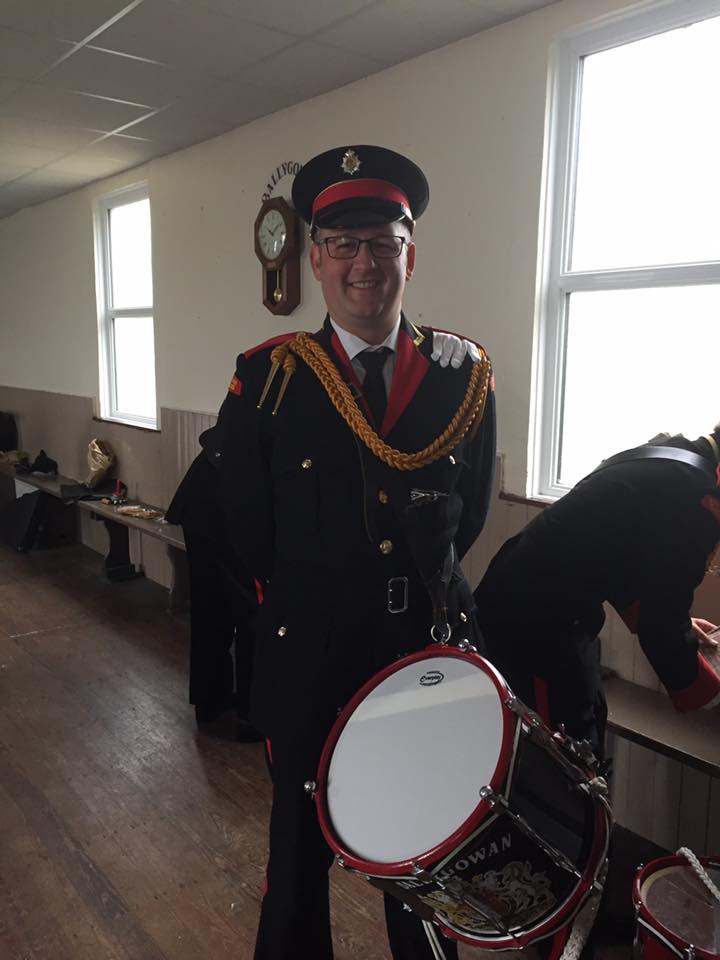 Richard Douglas receives the Trevor James Concert flute after the 2016 Flute Band Association’s Own Choice Contest. The flute was presented to the winning band in the Championship section by John Seabrook of Trevor James. 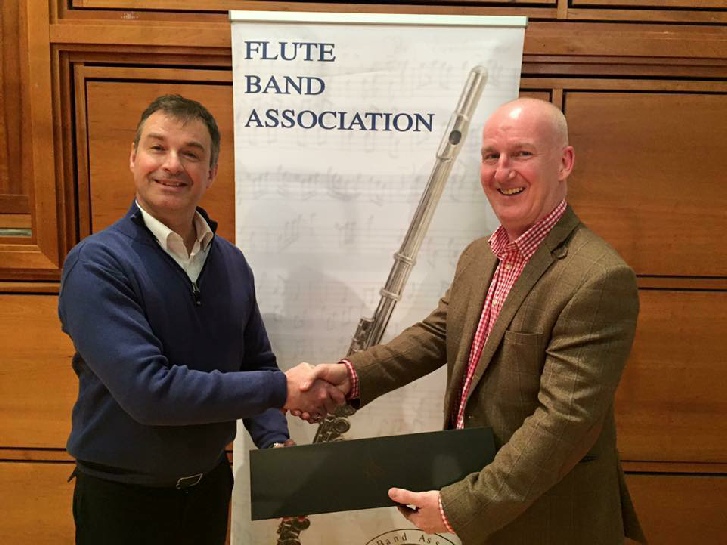 John Dawson collects the 2015 second place certificate from the President of the Northern Ireland Bands Association, Margaret Campbell at the annual presentation of prizes. 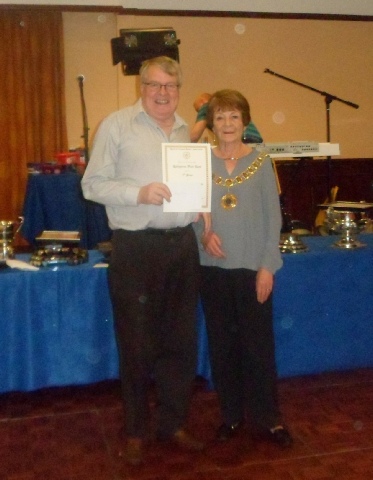 On 17 April 2014, the Band was invited to a reception in the Mayor’s Parlour to celebrate our success in retaining the World Championship for a third successive year.
Left-to-right
Seated:  John Douglas, Mayor, Councillor Stephen McIlveen, Stephen Carse (Band Chairman)

A large Ballygowan contingent attended the NIBA Annual Dinner & Presentation of Prizes on 14 November 2013. It was held in Tullyglass House Hotel, Ballymena, and a great night it was. We shared transport with our Ballylone friends and neighbours, and the craic on the bus added to the fun..
John Dawson collected the Winner’s Trophy, certificate and medals
Steven Cairns lifted the Interpretation Prize
Piccolo Prize winner Andrew Douglas was playing in a concert elsewhere, so his Dad Mark collected the trophy on his behalf.
Steven Carse collected the Percussion Prize
Laura McBride went up for the Best of the Day performance
Altogether, a great day at the office on  October 12. Margaret Campbell, President of the Association presented the trophies.

At rehearsal, prime mover  of the Saintfield Harvest Festival Edward Craig takes up his first opportunity to conduct a flute band

World Championship, Market Theatre, Armagh, 12th October 2013. It was a case of three successive wins with three different conductors - that’s not been done in this contest before! It’s not that we strive to turn over conductors, but then again we did win the Portrush Masters Contest four years in a row with four different conductors!
Playing
Taking a bow

The 12th of July 2013 will go down as one of the hottest on record, so Ballygowan took the decision to leave the heavy serge jackets behind - that’s not all that was left behind - one of our number lost the sole of his shoe in the melted tar!!

Music From The Masters Band Contest, Portrush. The contest ran for twenty years, and on the last occasion, the organisers were kind enough to tell us that Ballygowan was the only Band to enter every single year. They added that we were the most successful band during those years and the most innovative - indeed Jean Douglas received a special award for her input into Ballygowan’s antics during those years!

At the 2012 Flute band Association Annual Dinner, recently elected Chairman Stephen Carse lifts the winner’s trophy and framed certificate. Below is Conductor Windsor with his wife Isobel. Windsor is holding the trophy for Best Interpretation which he gets to hold on to for a second successive year. Below that is Audrey Spratt, Tori Gibson and Libby Douglas with the evening’s trophy haul, and Stephen is pictured with Mark Douglas who arranged the test piece Cappriccio Espagnol.

The Dinner Party at the 2011 NIBA Presentation of prizes.

Tuning up before playing at the 2011 World Flute Band Championship

Playing in Ormeau Park, Belfast. James Gourly is conducting - you can listen to John Phillip Sousa’s March Stars and Stripes Forever featuring Andrew Douglas on the piccolo at http://www.youtube.com/watch?v=9cnvmSnwqUA

Ballygowan F.B. invited to play for Royalty at a Garden party in Hillsborough Castle. Representing the Royal Family that day were H.R.H. Prince Charles and Camilla, Duchess of Cornwall. Conductor Dr. Windsor Hylands and James Gourley are the ones in conversation with Charles.

In April 2006 the Ballygowan Flute Band was invited to play at Rotary International’s UK-wide Conference in the Odyssey Arena , Belfast. This was the first and only time that Northern Ireland had hosted the event, and the purpose of our invitation was to give the delegates a flavour of Northern Ireland’s cultural talent. The band “played in” the Colour Party and then gave a 20-minute concert - which went down very well indeed with the Rotarians and their guests
click for photo.

From left: Back row:

NIBA Contest 1989. Conductor Brian Houston guides Ballygowan to their second successive second place. Brian conducted his first rehearsal in Ballygowan on 01.09.83, and the band's first engagement under his baton was a Bandsman's Service on 25.09.83. It is no secret that the band was in the lower rungs of the Flute Band League's senior section when Brian arrived. When he moved on, the band was in the top three - including wins in Scottish Own Choice (1989) and in the Flute Band League Own Choice Championship (1990), followed by becoming World Champions in 1990..

Trophies: taken in Ballygowan - from left

The Young Musician of the Year trophy was presented to the band in 1987 by Derek Denvir, and John Dawson added the roll of honour certificate. We don't know where these are!!

April 1984 leading the Youth Organisations to their annual church service

The Bandroom's first central heating system was switched on for the first time on 02.02.84

Impromptu rehearsal - a long time ago!